Charger with link to Gustav Stickley

In January of 1903 Gustav Stickley visited London with a view to returning to America and holding an Arts & Crafts exhibition. He flew on to London from Paris where he had visited Siegfried Bing and Rene Lalique. His aim was to travel to Europe to find objects to include in his planned exhibition.

It is highly likely that Stickley attended the seventh exhibition of the Arts and Crafts Exhibition Society which opened in London on 16th of January 1903. One of the exhibitors at the exhibition was Faulkner Bronze & Co who had a number of items including lights designed by Anne Stubbs. It is here that Stickley most likely bought the four lights that we know he purchased from Faulkner Bronze & Co on this trip.

Importantly, Stickley also visited a retailer, Art Fittings Ltd, in Westminster in London. Not much is known about Art Fittings Ltd although they advertised widely in The Studio magazine in the early 1900’s. 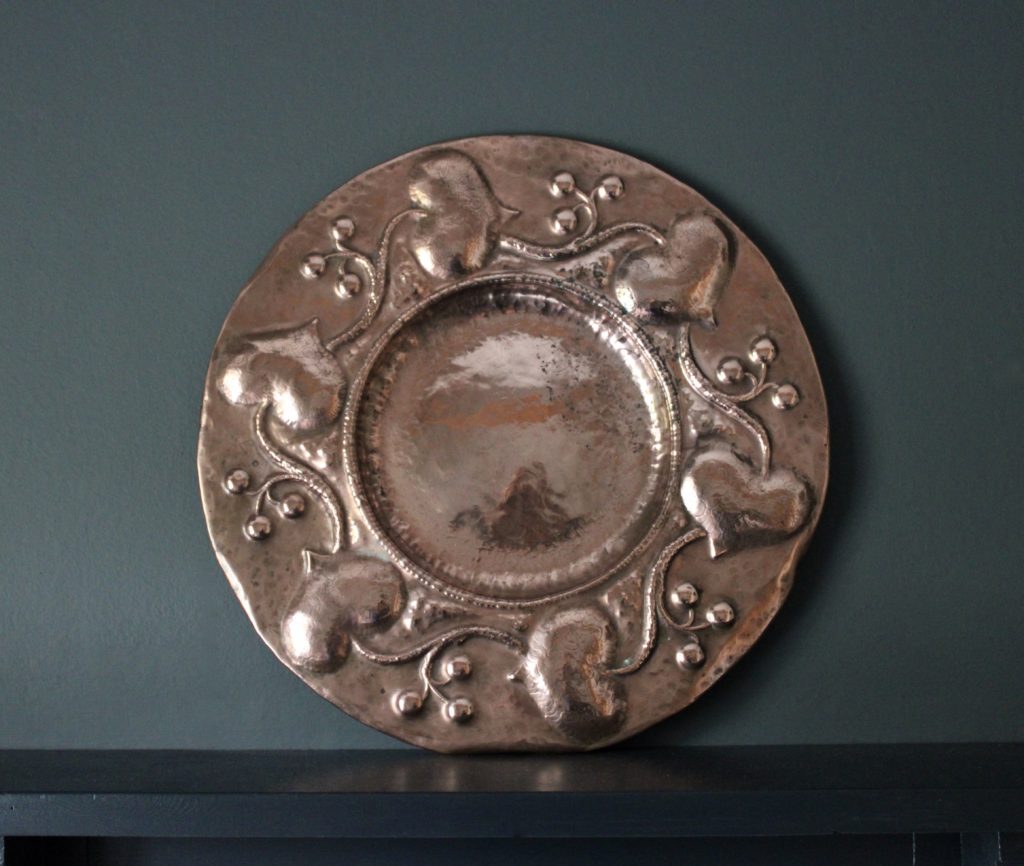 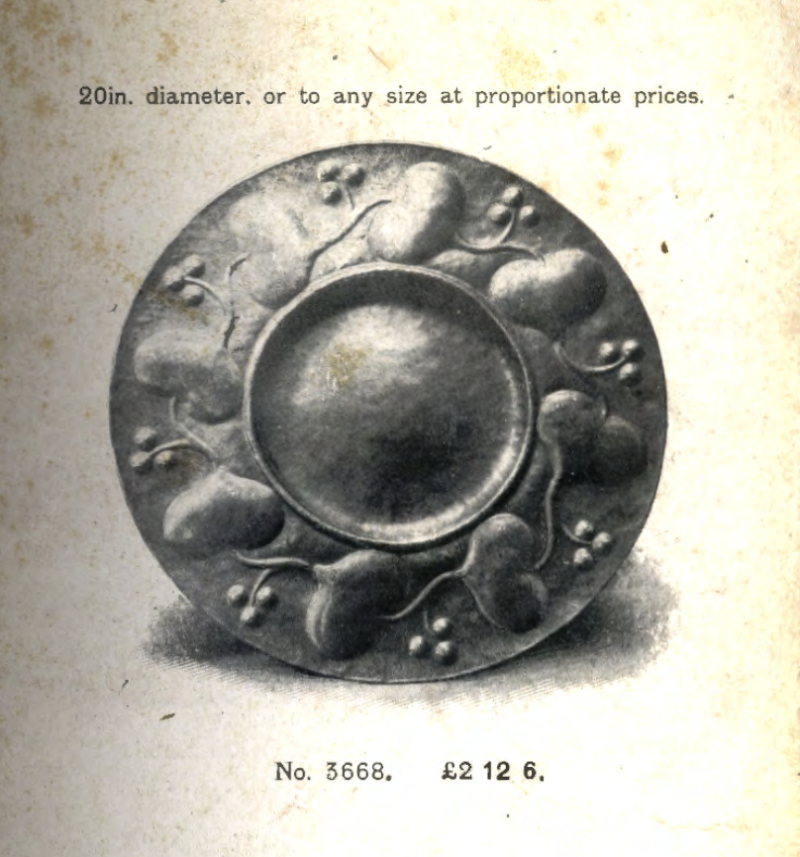 The charger illustrated above is almost identical to a design shown in the Norman and Ernest Spittle catalogue produced in 1900.

The design in the Norman and Ernest Spittle catalogue is identical to one shown in an Art Fittings Ltd advert shown in The Studio in 1902.

I was fortunate enough to find someone willing to share an early Art Fittings Ltd catalogue with me. It was very clear immediately that Art Fittings Ltd was a retail outlet for the firm of Norman and Ernest Spittle. 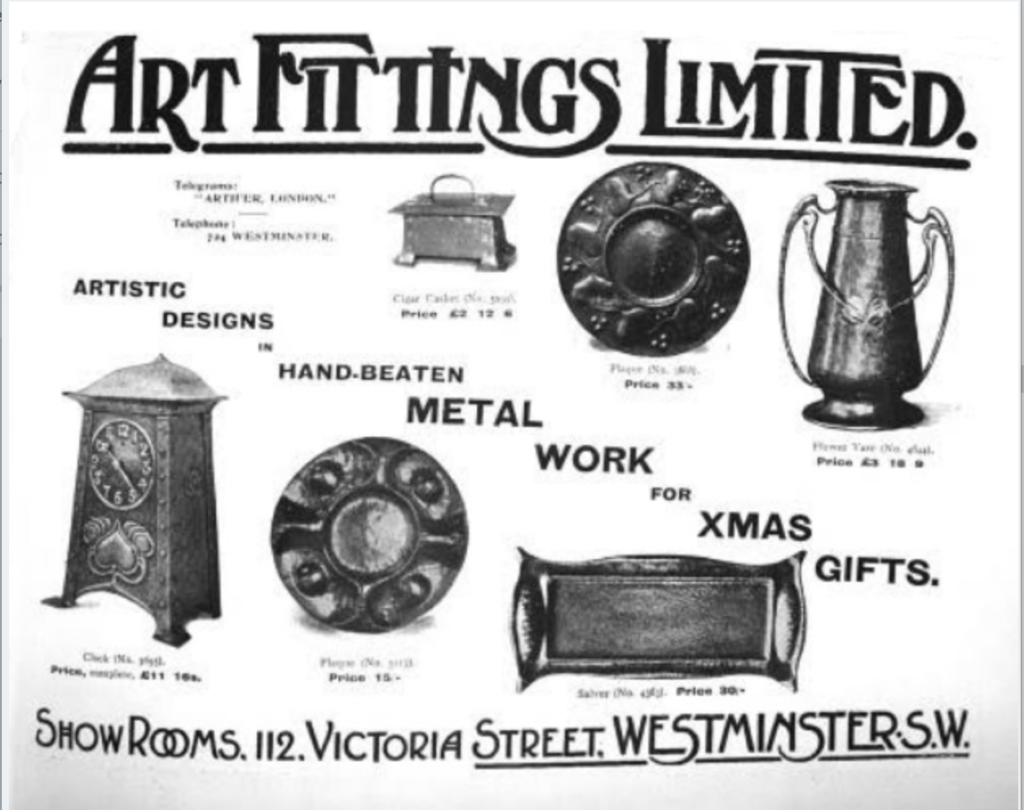 So back to the link with Gustav Stickley. It is documented that Stickley purchased at least seventeen examples of the work of Art Fittings Ltd.

Stickley returned to America and launched his own Arts and Crafts exhibition in Syracuse between March and April of 1903. The objects he had purchased from Art Fittings Ltd and the other European makers were displayed along with the work of American artisans. Many of the pieces shown in photographs of the exhibition match those in both the Norman and Ernest Spittle and Art Fittings Ltd catalogues.

Although our charger does not appear to have been shown at the Syracuse exhibition it does make an appearance in Stickley’s periodical The Craftsman, May 1903. In this issue Stickley published plans for the first “Craftsman House” and a charger of a similar design appears above the fireplace in an illustration of the hall. It seems very likely that the same design of charger was one of the seventeen objects purchased by Stickley in the Art Fittings Ltd shop. 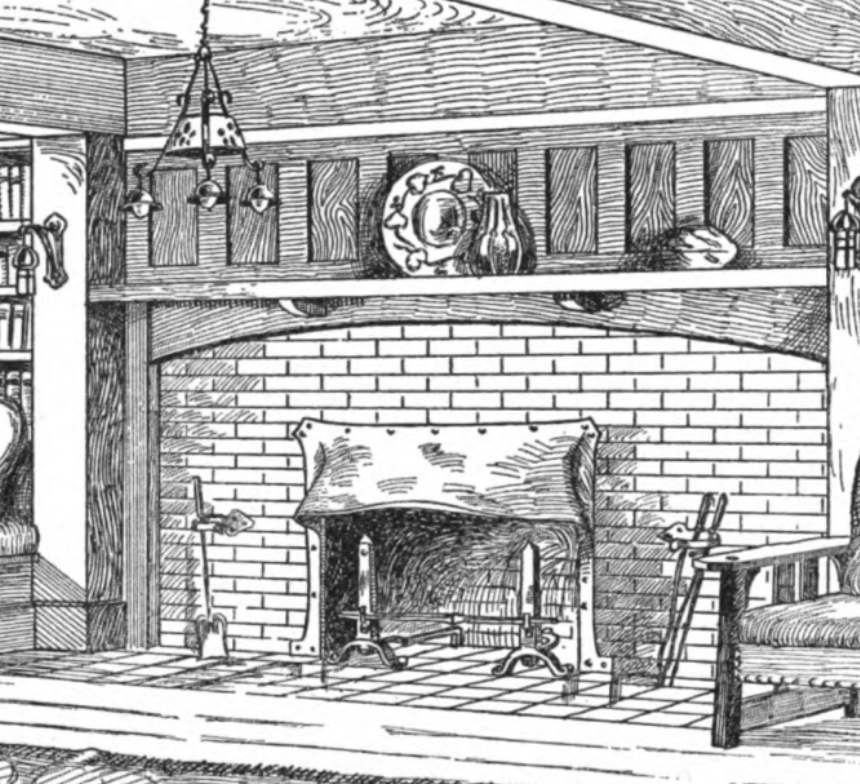 From the short piece of research undertaken in relation to this charger it is clear that there is a fascinating story to tell about Stickley metalwork designs. Many of his lanterns are modified designs by Faulkner Bronze and Co, most likely originally designed by Anne G Stubbs. Similarly, many of the most successful metalwork designs sold by Stickley appear to be direct copies or modified designs taken from the Birmingham firm of Norman and Ernest Spittle.