Sometimes you come across pieces that demonstrate the close links between the best known Arts and Crafts designers and makers. This beautifully crafted stationery cabinet is a great example of how the best all worked together.

The stationery cabinet is attributed to Arthur W. Simpson. Simpson was born in 1857 in Cumbria. A talented carver from a young age he was apprenticed to Gillow’s of Lancaster. After gaining some experience with a number of firms he returned to Kendal to set up his own workshops.

The move towards the Arts and Crafts style came in 1889 when a piece by Simpson was exhibited at the Arts and Crafts Society Exhibition in London. For the next decade Simpson was heavily influenced by the Arts and Crafts movement. During this period he set up “The Handicrafts” workshops in Windermere. He was a well known figure within the movement and became friends with John Ruskin, C.F.A. Voysey, Richard Llewellyn Rathbone, Thomas Mawson, Harold Stabler amongst others. The Keswick School of Industrial Arts also featured in exhibitions he held. Simpson went on the make furniture for C.F.A Voysey and M.H. Baillie Scott.

This piece probably dates to around 1905. A very similar stationery cabinet was illustrated in The Studio in 1909, Vol 45. 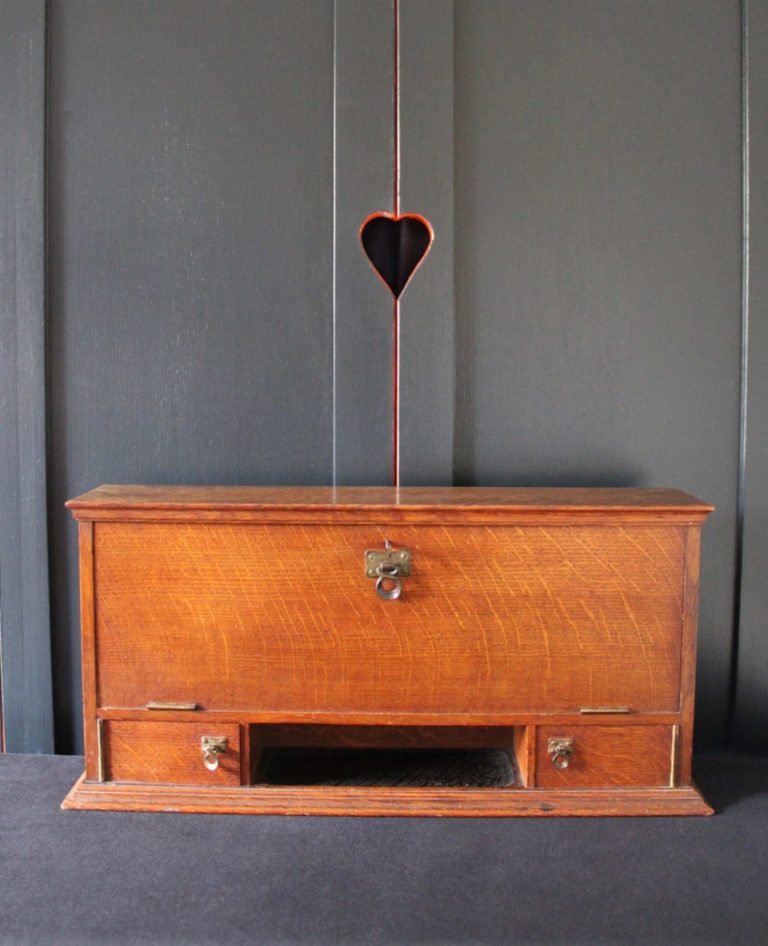 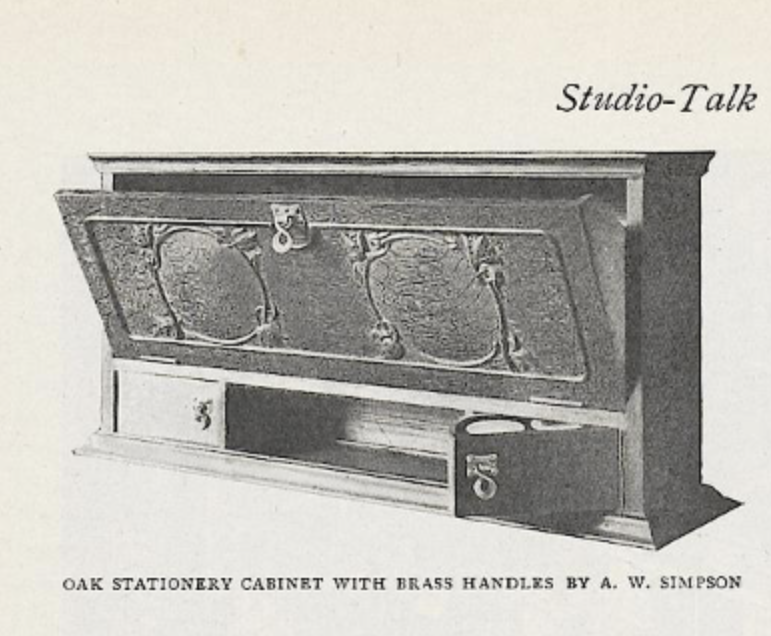 The next maker involved in this cabinet is Richard Llewellyn Rathbone. He certainly designed the metal handles on the cabinet. Rathbone was a designer and maker from Liverpool. His family were related to W.A.S. Benson and his cousin ran the Del Robbia Pottery so he was well aware of the Arts and Crafts movement.

Rathbone produced metal fittings to designs by C.F.A. Voysey, A.H. Mackmurdo and Heywood Sumner. His first workshop was in Liverpool but he moved to London in 1902. he went on to teach and he eventually became the director of the Art School of the Sir John Cast Technical Institute.

Simpson may well have been aware of Rathbone through Harold Stabler. Stabler had been Simpson’s first apprentice before moving to teach at the Keswick School of Industrial Arts and eventually working with Rathbone in Liverpool around 1900. 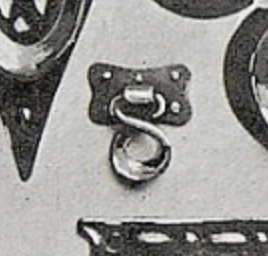 The Rathbone handles on this piece were shown in The Studio in 1900, Vol 18. 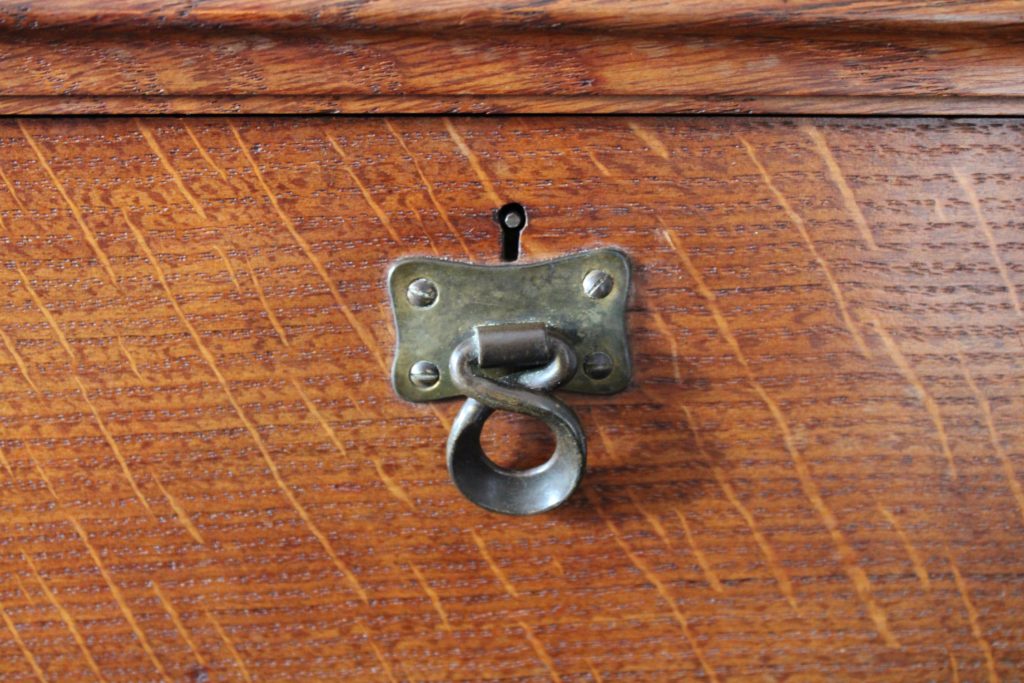 The final maker involved in this cabinet is Ruskin Pottery. The small inkpot in the cabinet drawer is attributed to the Ruskin Pottery. It’s design and form is very similar to other souffle glazed wares produced around this time.

Riskin Pottery was set up E.R. Taylor in 1898. Taylor was the first principal of the Birmingham School of Art. The Pottery was run by his son, William Howson Taylor. They were both very successful and very well know within the Arts and Crafts community. 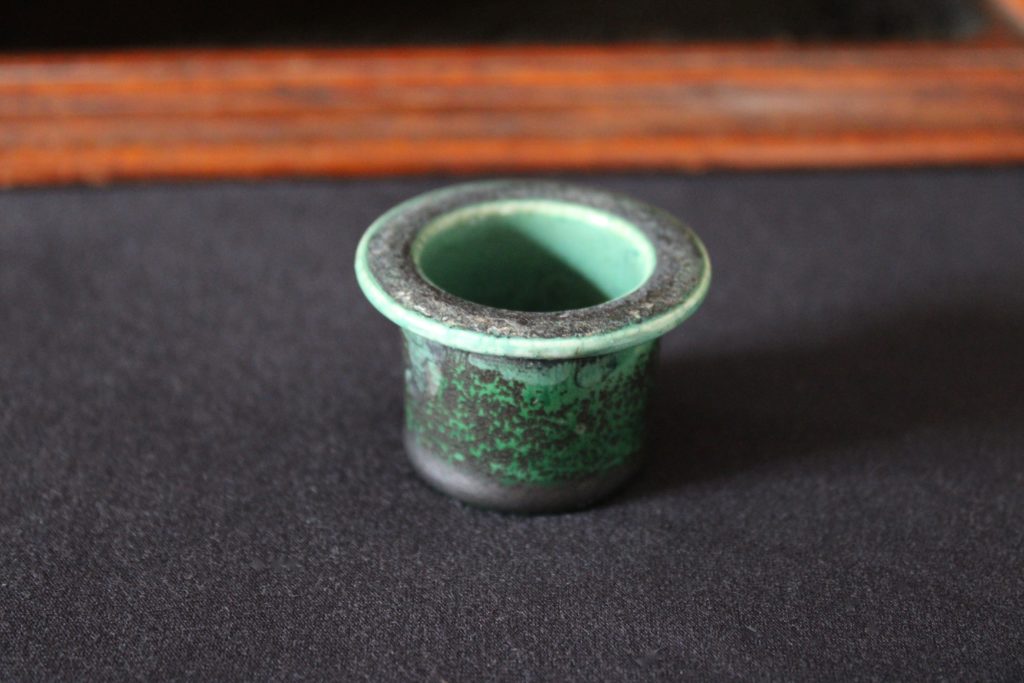