Belt by the Barnstaple Guild of Metalworkers

The arrival of a copper belt buckle, which I am attributing to the Barnstaple Guild of Metalworkers, sparked some interesting research into this lesser known organisation. I was very surprised at the lack of information about the Guild! The belt in question is attributed to the Guild based on an image in The Studio, 1905: 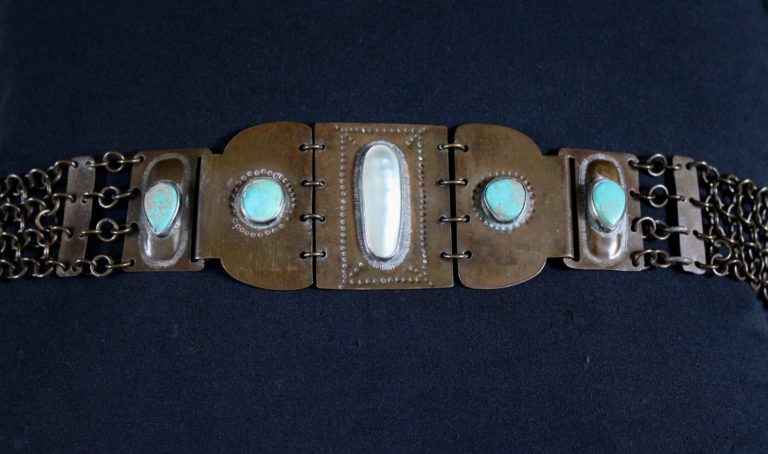 The second belt down in The Studio image is strikingly similar to the belt in question. The belts are described as being designed by the jewellery maker, Frederick James Partridge. There is an article on the proceeding page of the Studio about his jewellery and many further examples given.  F.J. Partridge’s work is well known. He was born in Barnstaple, North Devon. He studied at the Birmingham Municipal School of Art in the early 1900s. There are a number of potted histories about him on the web and most state that he was involved with the Barnstaple Guild of Metalworkers in some way.  In the 1903 Studio further jewellery made by the Barnstaple Guild of metalworkers are shown. These are described as designed by F.T. Partridge but it seems likely that this was actually F.J. Partridge.

The design of the belts looked very different from all of the other works designed by F.J. Partridge and a chance spot of a footnote in The Studio, 1905, explained why:

“In the June number, page 72, we illustrated some belt-buckles executed by the Barnstaple Guild of Metal-workers. These buckles were designed by Messrs F. Braddon and J. Dewdney, and not by Mr F.J. Partridge, who is not connected with the Guild.”

So the belt was likely designed by F. Braddon or J. Dewdney. This led to more questions .. who were these designers and was F.J. Partridge ever connected with the Guild?

The origins of the Guild are sketchy. The Guild was most likely set up around 1902. They are mentioned in the Western Daily Press in October of 1902 and The Arts and Crafts Magazine, Vol I and II, issued in 1904 stated that the Guild had been in existence for three years. The image below is of Jewellery by the Guild exhibited at the 1904 res Designers Exhibition.

From 1902 to 1909 there are numerous mentions of the Barnstaple Guild winning awards in Arts and Crafts exhibitions, primarily for Jewellery. There are three designers whose names keep coming up. The first of these is Maud partridge.

Maud Partridge was clearly a talented metalworker in her own right and won a number of awards for her jewellery. It’s probable that she was the key link to F.J. Partridge who provided some designs to be made up by the Guild in the early 1900s.

But who were the other key designers for the Guild and, more importantly, likely designers of the belt? These were almost certainly Frederick Braddon and James Dewdney. Both were well know Art Pottery designers working for Brannam Pottery in Barnstaple. It seems they were also interested in metalwork and they produced both jewellery and mixed metalwork in the Arts and Crafts style for several years as part of the Barnstaple Guild of Metalworkers.

No doubt there were others involved in the Guild but hopefully I have pieced together a few bits of a very fragmented story. Barnstaple would have been a thriving hub of Artists, Potters, Metalworkers and Furniture Makers, all working in the Arts and Crafts style at this time.