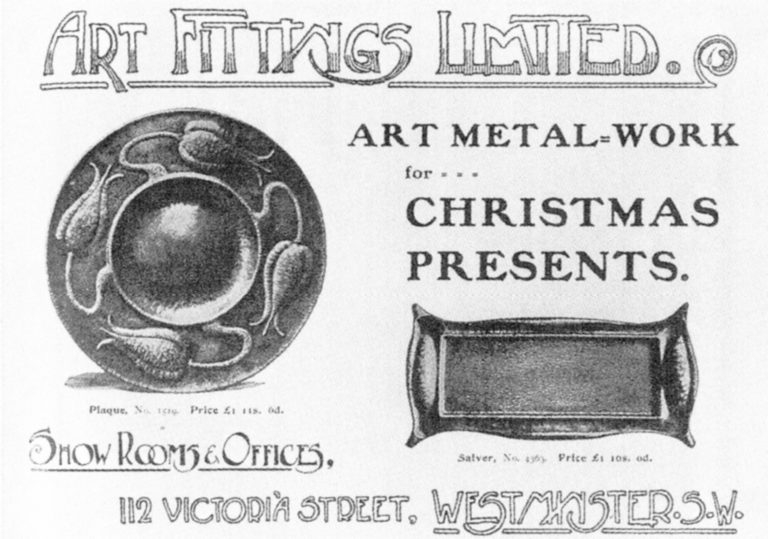 In 1899 the firm starts to get noticed by influential periodicals of the day. The Artist has a very complimentary article featuring the work of the brothers. In the same year, The Studio shows a number of the firm’s designs. Interestingly, the Studio states that the designs were by Norman Spittle so it seems likely that Norman was the key designer in the firm at this time. The firm appears again in The Studio in 1901 where the two copper and iron fire places they exhibited at The Leeds Arts and Crafts exhibition were again praised.

Tragedy struck in 1902. Norman Spittle died in January 1902 at the young age of 27. I have yet to find out what happened to Norman but this must have been a terrible blow for Ernest. Not only did he lose his brother but he also lost his business partner and key designer.  The firm appeared to be on the cusp of commercial success. Sadly in March of 1902 the firm was mentioned in the Western Daily Press as the designers and makers of the fireplace, fireplace implements and electroliers in the rooms being specially decorated for a Royal visit to Bristol. Norman didn’t live to see the room finished.

Art Fittings Limited appears to have been relatively successful. It advertises quite heavily in The Studio between 1902 and 1904 with most of the metalwork shown also appearing in Spittle catalogues. 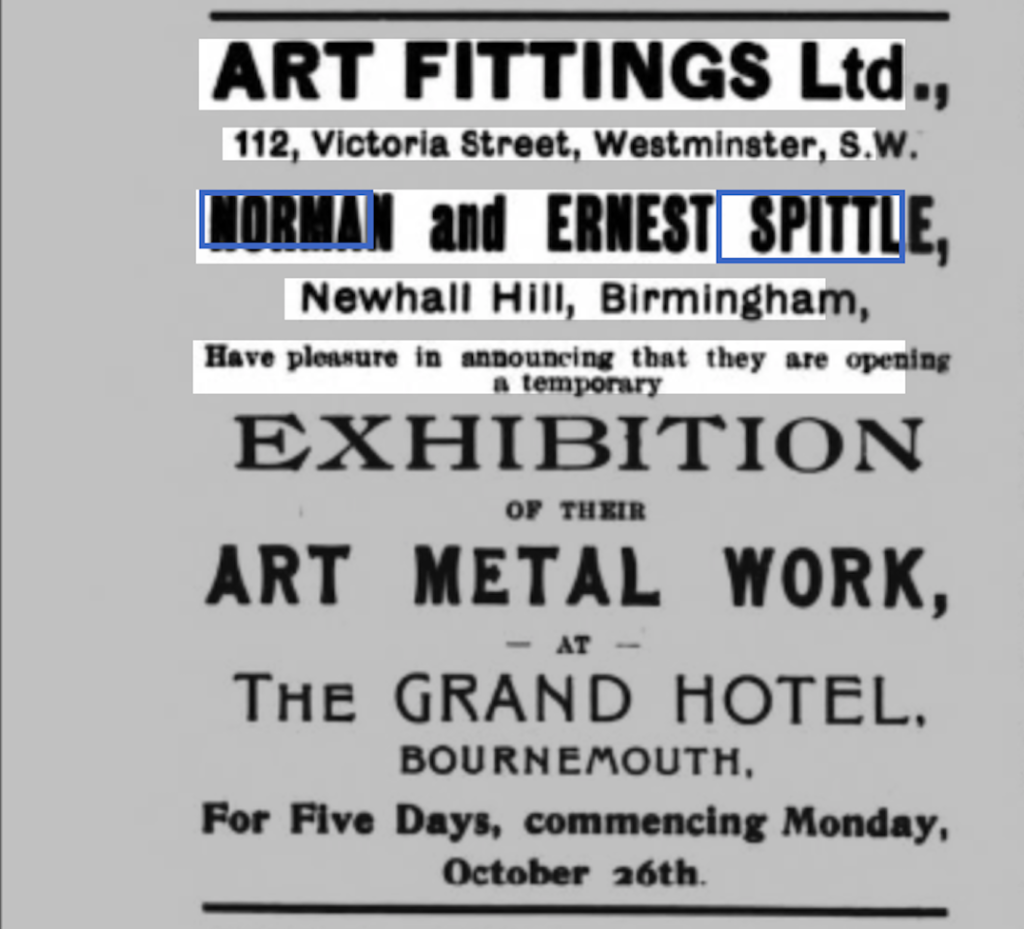 Ernest had a further problem in 1903. The newspapers of the day all reported on a legal dispute between Art Fittings Limited and Soldiers’ and Sailor’s Help Society. The charitable organisation was set up to help war veterans of the day. Unfortunately they had opened an office in the same building (Albert Mansions) in Victoria Street, Westminster, where Art Fittings Limited had their showrooms. Art Fittings Limited lodged a complaint because there we long queues of men outside their showrooms and there were frequent altercations. The case was eventually settled and the charity moved out of the building but this no doubt impacted the success of the firm.

Ernest continued to run the business between 1902 and 1906, even after the loss of his brother and the unexpected legal battle. The firm continued to trade under the names of Norman and Ernest Spittle and Art Fittings Ltd. The firm also heavily advertised a new material that they had patented for the manufacture of art metalwork, namely Pewtal. Pewtal was a composite of Pewter and Aluminium which seemingly had the pleasing colour of pewter but was easy to work, lighter, stronger and suited to more applications. Having now handled a piece of Pewtal I am not convinced it was wholly successful!

Around 1906 Ernest appears to change his surname to Spital. Why he did this is unclear but it may simply have been viewed as a better surname from a marketing perspective. The Studio has two designs by N & E Spital which were older designs under the new brand. The name change also seems to have coincided with Matthew Clark joining the firm in 1906.

The name changes once more to Spital and Clark in 1907. Spital and Clark continues to operate until 1914 when they amalgamated with Architectural Metal Work Manufacturers, J.W.Singer and Sons of Frome, Somerset. Ernest became one the directors and around 80 of the 120 workers from Birmingham relocated to Somerset. The firm continued successfully for many decades. 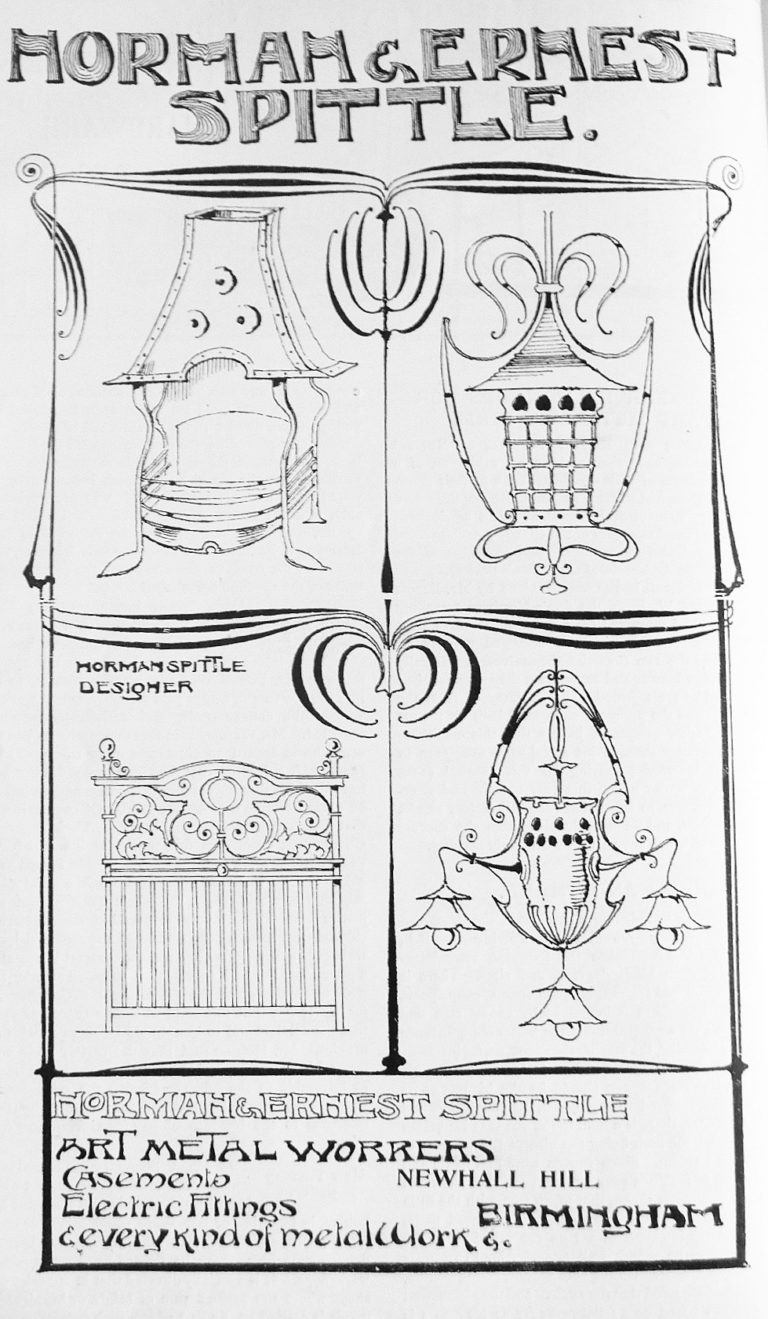